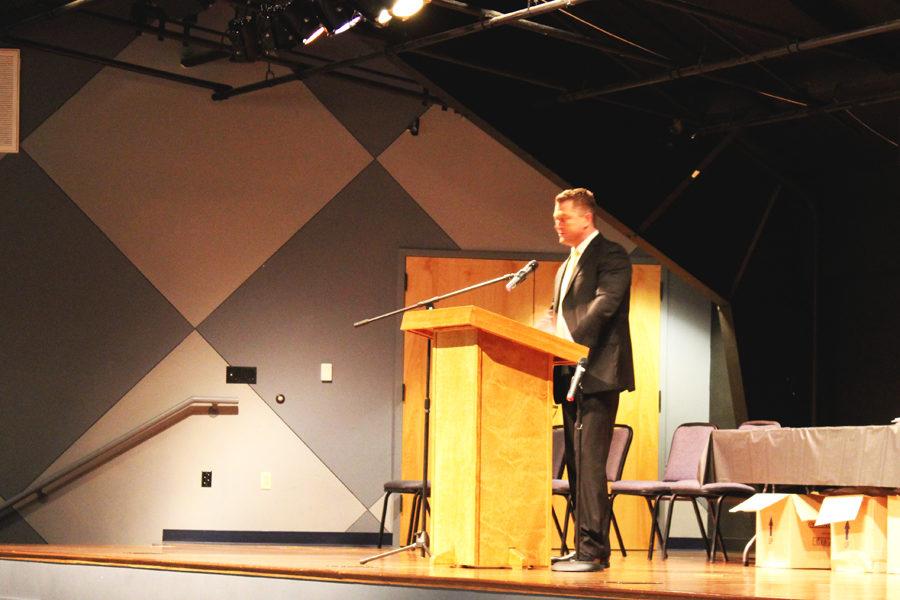 Guest speaker Wess Moore encourages players to enjoy their time as a team and learn all they can from high school football.

Rewarding the players who have worked hard throughout the season. That is what Coach Scooter Register says the football banquet is all about.

The football banquet was a formal event but the players were all just excited to visit with each other. They met at Oak Park church in January, and it was filled with good barbecue and decorations. The senior players had their seats reserved right in front of the stage. The night started off with everyone getting their food and sitting by their friends. The parents were allowed to come, and they sat on the right side of the church.

After everyone ate, each football coach spoke about the season. They all talked about how the team had started off with three wins, and then kind of lost their rhythm. They said that the team was able to get it back at the end of the season and played their last couple of games at a high level. The coaches then honored all of the volunteers who helped the team during the season.

The special teams Most Outstanding Player went to the kicker, senior Jason Ronnel. The Most Coachable award went to senior Thomas Waldon. The Fellowship of Christian Athletes Leadership award went to the senior Josh Cole (his second year winning the award).

Overall, the football banquet was a time for everyone to relax. All of the coaches had fun honoring their players and receiving praise for the amazing team that they coached. The players enjoyed getting their hard work recognized, and getting to visit with their senior teammates before they left. It was definitely a night that they will all remember.