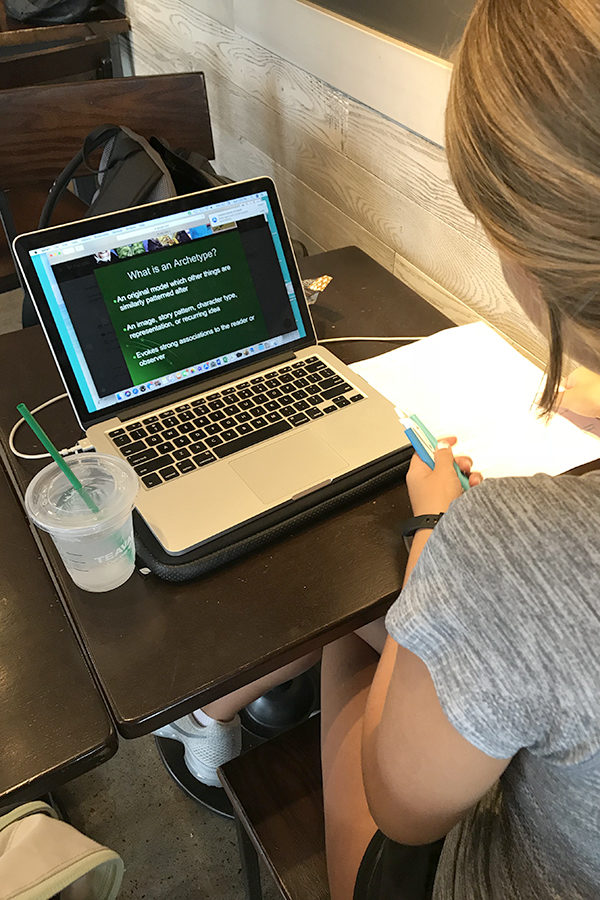 Sophomore Clare Enderlin works on homework using her own laptop, instead of the tablets given to freshmen last year from the school. (photo by Annie Fortune)

Since the 2017-2018 school year, students in their freshman year have been receiving Slate, an 8-inch tablet provided through a grant from Sprint. Last year’s class of freshmen, now sophomores were the first group to get this technology.

The purpose of these tablets is to give all students access to the Internet to do homework, projects, and classwork at home and at school. However, most students with tablets do not use them, and very few have ever had a teacher who uses them in class. In an informal poll of 65 sophomore students, 5 students said that they have used their tablet at home, and two have said that they have used them in school. Open responses from this poll include students saying that the tablets are not helpful, that they barely work, and that they work very poorly.

“I have not taken my tablet out of the box,” sophomore Clare Enderlin said. “The whole purpose of getting them was to have access at school without the Chromebooks, and that’s never happened.”

Some students do not use their tablets, but rather have them sitting somewhere at home, not accessed at all.

“I have never used my tablet. It’s in a cabinet in my kitchen, so I won’t lose it before I have to turn it in,” sophomore Katherine Erbach said. “None of my teachers have ever used the tablets in class.”

Another concern with these tablets is whether or not they function in the ways that students need them to.

“When I got my tablet, I tried to use it, and it didn’t even work,” sophomore Olivia Hayden said.

Students agree that the idea of Internet access for all students was good and should be something to strive for.

“I think getting tablets sounded like a good idea at first because it would give Internet access to everyone, but it has obviously not worked the way the school thought it would,” Katherine said.