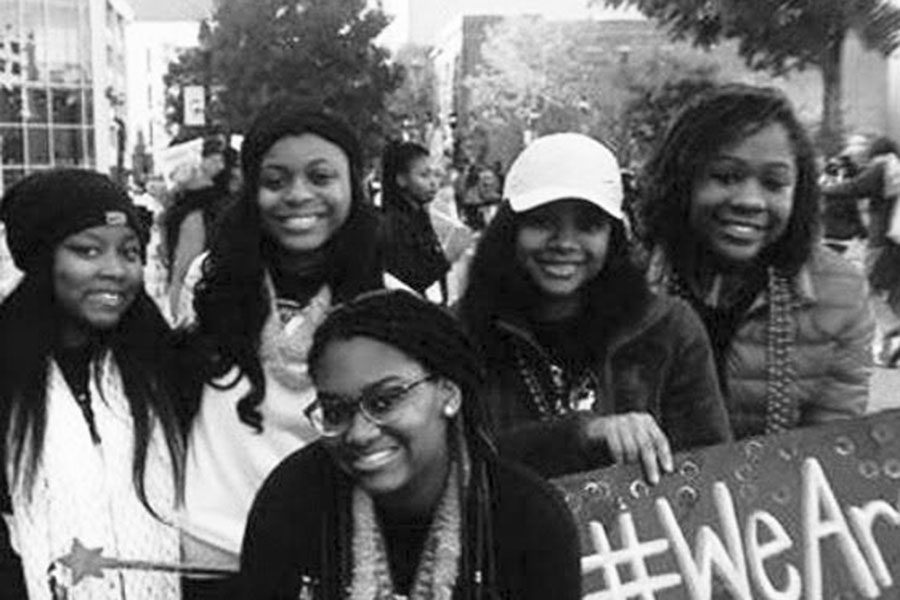 Debutantes came to Race For the Cure to support, encourage, and cheer runners at the beginning of the race. Leading to the day of the ball many Debs anticipate the big day. “I think it will be like the end of the beauty and the beast glamours and a result of hard work. I can’t wait to dance with my dad,” senior Madison Edmondson said. (photo courtesy of Adaja Cooper)

Cotillions are formal social dances that were first created by French royalty in Europe during the early 18th century. Later, cotillions became popular among the families of nobility in England and mostly southern wealthy white families in the United States. At these dances, girls were formally introduced to society, primarily to the family’s business and social network. The goal was to prepare the girls to find husbands. During the cotillion training period, they practiced good behavior, learned dining etiquette, basic dance steps, and how to dress. These preparations are what make young ladies Debutantes.

Yet, it was not until the early 20th century that some prosperous black families took on the cotillion tradition as well. There is not much documented evidence of the history of black Debutantes. But, in the 1940s, black sororities, fraternities, social, and civic organizations formed the black social structure in their communities. Through local sorority and fraternity chapters, the cotillions gained more popularity, started to include young ladies from different backgrounds, and featured more leadership and self-confidence skills.

This year, the tradition still carries on all across the United States and currently in Arkansas with the aid of Central Arkansas Sphinx Foundation and Pi Lambda chapter of Alpha Phi Alpha Fraternity. Almost 70 young ladies were chosen this past summer to be Debutantes for the ball occurring on Dec. 22. Until that time, the young ladies are expected to participate in many different outings and activities.

“I heard about the program last year, and after talking with previous Debutantes, it seemed like something I would really want to participate in,” senior Amori Anthony said. “Becoming a Debutante has allowed me to meet more people and really step out of my comfort zone.”

Most girls hear about the program from their mothers, who were usually Debutantes themselves and want their daughters to pursue the tradition. But in recent years, the tradition of black cotillions has been diminishing, yet girls still usually end up hearing about the program through friends and family. It is important to keep the tradition going because in the black community there are little to none generational organizations.

“I believe Debutante should be an important aspect in every young black woman’s life, because so often as black women we are belittled, and often times at a disadvantage in elevating in success,” senior Erin Jacks said. “Debutante teaches us how to prove them [society] wrong. United as a people we can achieve whatever we put our mind to, with grace, intelligence, and faith.”

Leading up to the time of the ball, Debutantes are expected to be pillar parts of community volunteering and participating in different outings and activities. Every month the young ladies are expected to attend workshops that range from speakers, etiquette classes, Race for the Cure, mother and a daughter luncheon. The Debutantes all look forward to these workshops, as they can be a way to further bond and learn with their fellow Debs.

“Being a Debutante means being able to express what it means to be a lady and to be an example of poise and grace. I think it also means having a chance to be a role model and influence for other girls,” senior Adaja Cooper said. “It has definitely taught me to be more confident in my inner beauty. I already know that it is an experience we will never forget. Not only are we learning important life skills, like interview techniques and etiquette skills, we are also developing long-lasting friendships and mentors.”

Black cotillions provide a pivotal moment in a young woman’s life as she takes her steps into the “real world,” and being a Debutante means more than just attending a ball that officially introduces them into society. Debutantes are strong black young ladies who have been dedicated to their studies, their community, and the betterment of themselves. The cotillion only serves as a way to award the girls for their successes in their young lives and present them to the world that they have been preparing for.

“I feel [the ball] will be unlike anything I’ve ever experienced; I’m excited to see myself in that dress and be able to bond in that moment with all the other Debs,” senior Zainab Shah said.