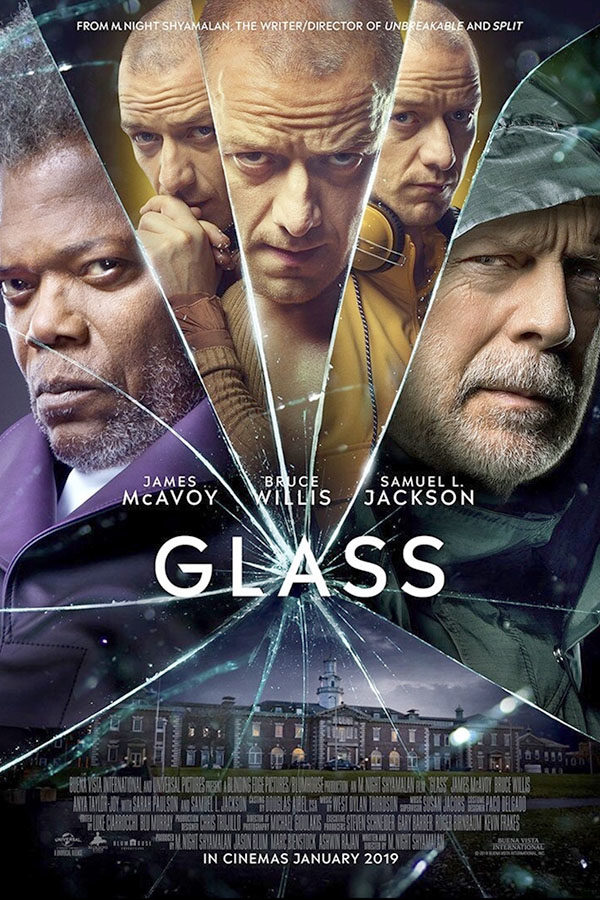 M. Night Shyamalan’s newest movie, Glass, follows three superhumans, as they navigate through a mental institution filled with doctors trying to convince them that they really do not have superhuman abilities. (photo courtesy of IMDB)

I’m not going to lie, I was not excited at all about seeing Glass. It is nothing like anything that I am normally interested in, but let me just say this: it was amazing. Directed and written by M. Night Shyamalan, Glass met and surpassed all of my expectations, with a fascinating and unusual take on superheroes and superhuman abilities.

The film follows three characters with superhuman abilities, David Dunn, played by Bruce Willis, Elijah Price, also known as Mister Glass, played by Samuel L. Jackson, and the many personalities of Kevin Wendell Crumb, James McAvoy’s character from Split, another Shyamalan film (Split is the second of the three movie series). The characters from both Split and Shyamalan’s earlier movie Unbreakable all meet up in the last of what is for now a trilogy.

In their own ways, all three end up at a psychiatric institution, where Dr. Ellie Staple, played by Sarah Paulson, works to convince them that they are not really superhuman, but just have various mental disorders that convince them that they are superhuman. Throughout the story, Elijah Price functions as somewhat of a mastermind, trying to figure out how to breakout and show the world their abilities.

James McAvoy’s incredible ability to transition between characters is fascinating and extremely impressive. There was never a moment where it was difficult to tell which personality he was using and each one had its own intriguing complexities. He was able to also show how all personalities worked with each other and what their roles were in his head, without major costume changes or changing physical traits of his character.

Because much of the film was set at the mental institute housing our three superhumans, many of the action shots were caught by security cameras, sometimes being shown as past security footage, giving the flashbacks an almost Ocean’s 11 feel. Other camera angles showed a very wide view, providing a look into every aspect of the situation, most often in action scenes.

The ending of Glass gives a glimpse into, hopefully, a new generation and universe of superheroes, born of M. Night Shyamalan. Will there be more movies to add into this world? Will we be introduced to more, unheard of, unusual superheroes? We will see.