The Tiger Online • May 2, 2019 • https://tigernewspaper.net/3650/opinion/mueller-releases-report-sparks-controversy/ 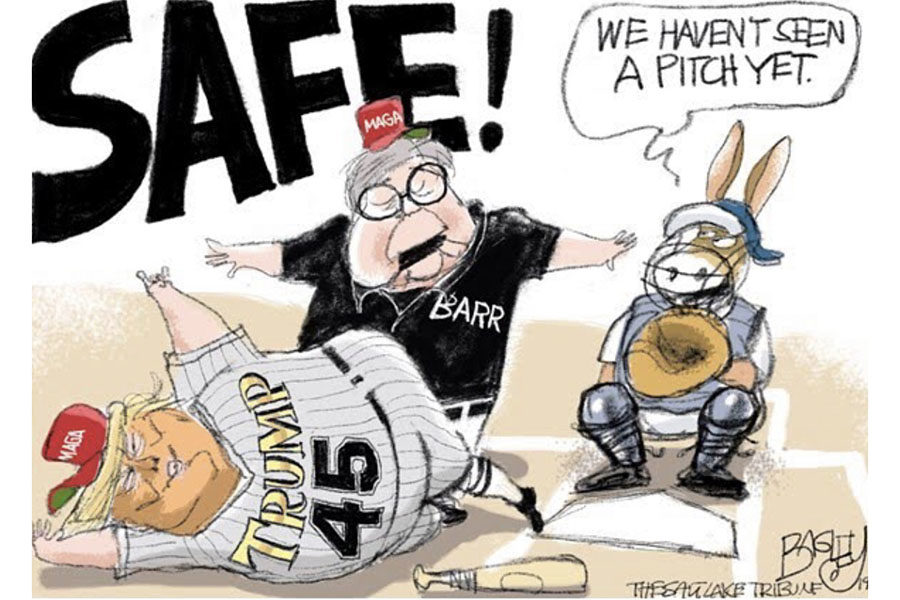 The Mueller report has been a popular topic of discussion among both journalists and political cartoonists. (art courtesy of the Salt Lake Tribute)

Special Counsel Robert Mueller completed his report for the investigation on Russian involvement in American political affairs, namely interference in the 2016 presidential election.

Mueller was appointed to the investigation May 17, 2017 by Deputy Attorney General Rod Rosenstein. Mueller’s investigation soon began to encompass searching for obstruction of justice by President Donald Trump.

March 22, 2019 marked the end of the investigation when Attorney General Bill Barr received the report and issued a summary. In short, Barr decided Russia was not involved in swaying the election, and Trump is not at fault for obstruction of justice. It was also suggested that further indictments not be pursued.

“The investigation did not establish that members of the Trump campaign conspired or coordinated with the Russian government in its election interference activities,” Barr said in his summary of the Mueller report.

The full report, however, has not been released to the public. This has led to intense scrutiny over the authenticity of the report and summary. If the report is as thorough as it sounds, being an almost two year endeavor for Mueller, and completely honest, the full report should

reflect the statement released by Barr. He should have no problem releasing more evidence. Why avoid it if you have nothing to hide? Democrats ranging from professional politicians to left-leaning citizens are asking these questions, some more convinced than ever of Trump’s involvement with Russia and the election, and that Mueller and Barr are covering up a scandal.