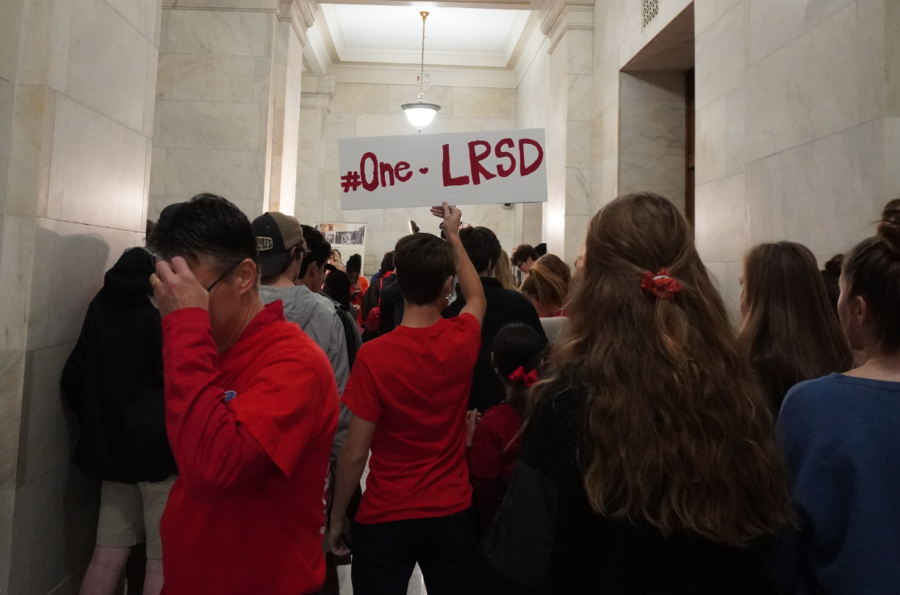 On Oct. 30, students gathered outside Governor Asa Hutchinson's office in response to the decision to end recognition of the LREA.

This is a time of uncertainty for the Little Rock School District. Tensions are high after the Arkansas State Board of Education decided on Oct. 10 to end the recognition of the Little Rock Education Association (LREA) as the exclusive contract bargaining agent for employees of the LRSD. The Board also voted to return unified local control of the district by November of 2020.

These decisions have been greeted with uproar from the Little Rock community. Educators are suspicious of the return to local control because the district will remain a Level 5 district: one that needs heavy support from the state. This means that the elected school board will operate under the jurisdiction of Commissioner of Education Johnny Key. Some teachers are frustrated that although the district will have an elected school board, the state will maintain a large measure of control.

“The biggest thing is there’s a myth now that the board decided to give the district back [to local control] in 2020. They in no way said they’d give full control back to the district; Johnny Key will have the ability to veto anything the board votes on,” art teacher Jason McCann said.

Educators are also angry that the state is eliminating the LREA’s power of negotiation.

“Being a member of a teachers’ union means that I can focus on doing my job very well, and I can worry less about the various and sundry issues because they’re being negotiated by my union,” U.S. history and economics teacher Ryan Parson said. “I think that makes me a better teacher.”

The union has been negotiating the contracts of LRSD teachers since the 1960s, and it has provided necessary support for teachers.

“The union has protected teacher planning time, unpaid duties, and also greater compensation and benefits, as well as providing a voice in policy making,” human geography teacher Chuck West said. “The decertification of it threatens our voice and our ability to protect the things I just mentioned, while doing nothing positive that I can see.”

Teachers worry that having the union’s negotiating power taken away could negatively impact their ability to do their jobs.

“I can’t speak for all teachers, but to me it is such a slap in the face that it hurts morale as well as creates a lot of professional uncertainty,” West said. “Teachers will always do everything we possibly can to do the best job possible, and we just want to be respected for that.”

Rather than feeling respected, educators feel threatened by the State Board. Teachers have already made sacrifices in the five years of state control over the district, and they wonder what will happen once they lose protection from the union.

“We have given up raises to have contributions to our health insurance. We’ve also sacrificed by giving up two days of pay, so our contract is two days shorter than it was before state control,” English teacher Amber McCuien said.

Teachers have a wide range of concerns, including longer working hours, increased class sizes and decreased health benefits. Another major concern is that recent legislation allows charter schools’ exemptions in state law to also apply to public schools. This means that if a charter school waived something like teacher licensures, public schools in the same area may do the same.

“What would normally protect a school from exemptions in state law would be a school board, and since we haven’t had a [local] school board, our protection has been the LREA,” McCuien said.

“One of the things I’ve been worried about for several years is that we’re dealing with a teacher shortage in Arkansas and any action that degrades the profession only makes it harder to attract more people to the classroom,” Parson said.

There is widespread concern that teachers will not continue to work under these conditions.

“It feels in many ways like we’ve been abandoned. Central High has a legacy of excellence, part of that is because of the faculty. I think we have the best faculty I’ve ever seen. But a lot of them probably are not going to work under these conditions anymore,” world history teacher Chris Dorer said.

The Arkansas State Board of Education has stated that a Personnel Policy Committee (PPC) will be elected to advise the board on employment policies. At the Oct. 17 Community Advisory Board (CAB) meeting, the CAB proposed that the PPC have one representative per school on the committee, but teachers at the meeting expressed their preference for the LREA.

“In theory [the PPC] will establish professional expectations and disciplinary procedures and that sort of thing, but it’s questionable about how much it would truly represent the best interests of teachers,” West said.

“I equate a PPC to a suggestion box which is just symbolic. I was on a PPC in West Memphis for years, you bring your complaints to the board, but nothing really gets solved,” social science teacher and cheer coach Kimberly Crutchfield said.

Many believe that the PPC would not be effective in representing the needs of the teachers because, although it can offer feedback to the school board, it has no real power in the decision making process.

“A union gives you the power to collectively bargain, to say ‘here’s what we want for our contracts,’ and this other thing, instead of collective bargaining, it’s more like collective begging,” McCann said.

Teachers are frustrated by not having their voices heard. They feel that they should have a say in decisions that directly impact them.

Teachers continue to do their jobs to the best of their abilities, but outside of the classroom, morale has been severely affected.

“What happens inside the four walls of my classroom is usually fantastic because I have really great kids that I work with. Outside of the classroom, this has been the most stressful time of my professional life,” Parson said.

Other teachers agree that they want to be there for their students, but they don’t feel appreciated by the state. Some teachers, however, are feeling support from the students.

“I think it’s important that we stand up and we fight,” Crutchfield said. “I’m really encouraged by the students. I’m excited that they’re supportive and they’re willing to stand up for their district.”

Students held a “sick out” Wednesday, Oct. 30 to show support for teachers and held a protest outside of the Governor’s office.

“I was there to show support for our teachers and to let our governing officials know that we are upset, we can’t be silenced, and this is just the beginning,” junior Madison Tucker said.