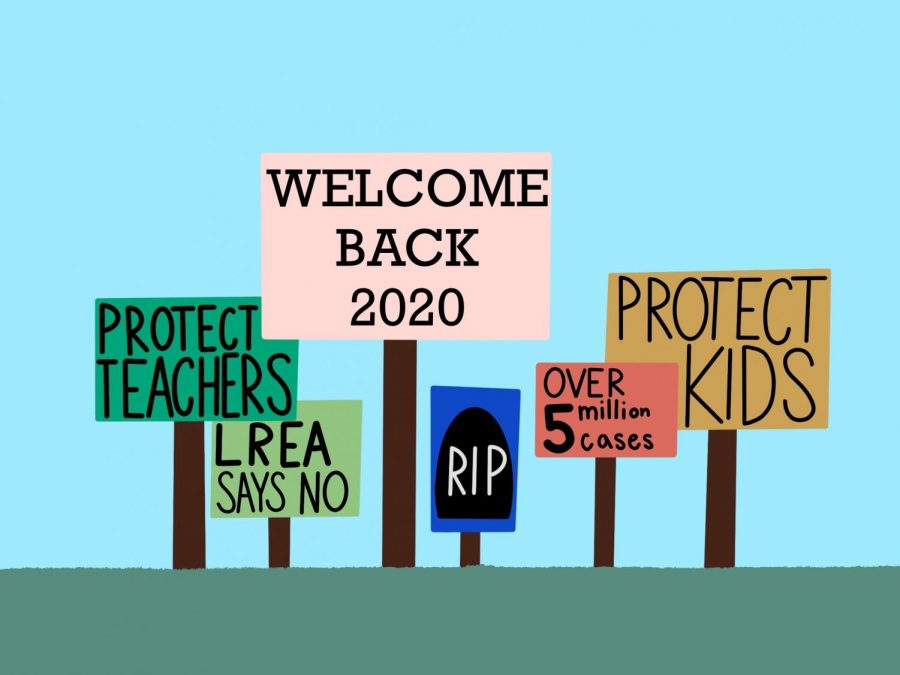 On Friday, August 14, the Little Rock Education Association released an open letter stating that teachers affiliated with the LREA would not agree to teach in-person classes when school begins on August 24th. The letter was sent based on a vote by the LREA to only teach virtually, despite the LRSD’s decision to open schools to in-person teaching.

The authors of the letter believe that the current plan to open schools in the Little Rock School District will not sufficiently protect teachers and students from COVID-19. According to the LREA, in-person schooling will only begin again if the Pulaski County positivity rate remains below 5% for 14 consecutive days. As of 2020, there are 25,685 students in the Little Rock School District, and many of these children attend a school that hosts more than 1000 other students. Such large schools significantly increase the chance of spreading COVID-19. Across the LRSD, 50% of students have elected to take exclusively virtual classes, which instructors will continue to teach even if in-person classes come to a halt.

In high schools like Central, 50% in-person attendance means that up to 1200 students will be taking classes in-person on school grounds. Even though schools in the LRSD have prepared safety measures such as sanitizing stations, distancing desks, and protective masks, many parents and students are still concerned, as the CDC has advised that gatherings be limited to a maximum of 50 people to slow the spread of the disease. However, students who elect to take in-person education often do so out of necessity, as certain students lack access to computers, have special needs, or don’t have funds for a healthy diet and rely on the free school lunch and breakfast programs.

Senior Eli Goldman elected to take in-person schooling despite the risk of viral infection because he feels that he cannot learn in a virtual environment.

“I don’t necessarily feel safe going to school. I just know that I’m not going to be able to keep up if I do it virtually,” Goldman said.

Other students shared Goldman’s concerns that a lack of in-person instruction would hinder their ability to learn. Senior Max Hodges had difficulty during her first experience using virtual schooling during the spring, as she struggled to understand new topics without the aid of a teacher.

“I have a hard time learning without a teacher, so virtual learning would be twice as hard as it already is,” Hodges said.

Senior Fisher Wolfe experienced other challenges with online schooling last spring, including an inability to concentrate on her work and a feeling of being overwhelmed by the amount of schoolwork that was assigned.
“I simply cannot focus in my house, and the last nine weeks online was absolute chaos for me last year. I didn’t really learn anything and I just sort of sped through all of the assignments and didn’t care that much about the quality of my work,” Wolfe said.

Some students sympathize with the teachers but are also worried about their peers who might rely on in-person schooling. Wolfe believes that the LREA waited too long to publish this letter, and that an earlier release of the letter could have given parents and students more time to prepare for a potentially all-virtual school year.

“I think it is great that the LREA is putting their foot down, but I feel the decision should have come sooner. I also am concerned for the in-person students of these teachers: will they just be left in the care of substitutes?” Wolfe said.

As the child of a teacher, Wolfe fears for her mother’s health as she goes back to working in a school building. Wolfe hopes that her mother will be able to create a safe, sanitary learning environment for herself and for her students.

Senior Danica Kilton is conflicted about the risk that instructors are taking to teach in the Little Rock School District. Many of those teachers are older people, and thus more at risk of contracting COVID-19 from students. Kilton feels that virtual schooling may be a better and more responsible choice, even though she initially wanted to try attending school in person.

“I want to go back and have as normal of a senior year as possible, but I don’t want to put my friends, teachers, or family at risk,” Kilton said. “I am signed up to go in person, but I kind of wish I could change now that I see how worried all of the teachers are.”

One common worry among students is that this school year, whether online or in-person, will be counterproductive to learning. Teachers may struggle to use new, virtual systems of instruction, and students who require more assistance may have difficulty keeping up with their work.

Junior Bert Lewis said that his main concern wasn’t getting the virus, but whether in-person schooling could even last without a solid scientific approach to the pandemic.

“Scientists are working overtime trying to perfect a cure for it, and we only make matters worse by rushing into things,” Lewis said.

The stress of the national pandemic combined with the uncertainty of the future policy of the LRSD may have a negative effect on the psyche of the students, as high schoolers struggle to cope with their coursework, their extracurriculars, and the pandemic facing the nation.

“Honestly, I don’t think this year will produce anything besides mental health issues and widespread anger,” Hodges said. “Nothing is going the way it should.”

As of August 19, superintendent Mike Poore has released a new plan of action: students who attend in-person schooling will do so on a rotating, staggered schedule in an effort to decrease the chances that COVID-19 will spread throughout the student body. On Monday and Thursday, students who elected to attend in-person with last names beginning with A-M will attend class in the building; on Tuesday and Friday, students with last names beginning with the letters N-Z will attend. Wednesday is reserved for the sanitization of the school.

Virtual students will also be assigned a C&I member to meet with them during the first week of school to acclimate them to a virtual environment. The LREA has yet to respond to Poore’s new plan of action.