Are You Among Us? 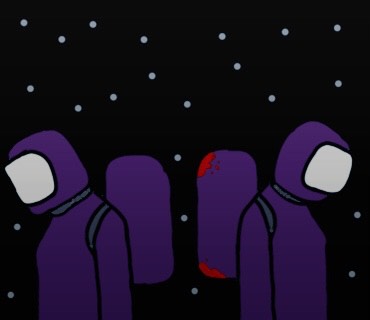 The 2018 game Among Us, created by Innersloth, is a game that requires social deduction. Among Us takes place in outer space, where there are four to ten players on a spaceship. There are one to three impostors, and the rest of the players are crewmates.

The goal for crewmates is to complete all of their tasks while attempting to figure out who the impostors are. The impostor’s goal is to kill all of the crewmates while maintaining their cover. Impostors can kill and sabotage the players. They can sabotage O2, which turns off the ship’s oxygen, giving the crewmates 30 seconds to turn on both of the O2 tanks. Sabotaging lights allows impostors to turn off the lights, leaving crewmates in the dark. Turning off the lights makes it easier for the impostors to kill crewmates without witnesses. Impostors can also sabotage the reactor, which leads the reactor to meltdown and requires two players to turn the reactor back to normal. Lastly, impostors are allowed to sabotage comms and all doors, which causes crewmates to be unable to see the tasks or to get stuck in the rooms. This is best used when alone with a crewmate or in a room that has vents, allowing you to kill the crewmate without witnesses. Vents allow impostors to travel from one room to the next without suspicion. But only impostors can use them, so it is vital to wait until you leave the vent so no one sees you.

When a dead crewmate is found, a meeting is called, where players try to figure out who the impostor is and who has an alibi. Crewmates who have been seen doing virtual tasks like a medbay scan, destroying asteroids in weapons, or throwing away trash in storage have the best and most solid alibi. During the meetings, you speak in the chat, but the meeting is timed, and it is difficult to type full sentences, which forces the chat to shorten words and phrases. This leaves us with a new game language, like “sus” for suspicious, “I saw them vent” used when you see the impostor vent, “they faked tasks” when you suspect someone is the impostor as they are unable to actually do tasks.  After a crewmate has been killed, they can either leave the game or stay to finish their tasks. Dead crewmates are still allowed to chat. However, it is the dead chat, and any player that is alive cannot see what the dead crewmates are typing, which is great because the dead crewmates are unable to say who the impostor is.

Understanding the maps is vital to surviving in the game. There are three maps that you could play; The Skeld, Mira HQ and The Polus. Skeld is the best map for new players, as it is split into two sections with the cafeteria in the middle and it is the easiest to navigate. Mira HQ is a little more difficult to navigate because of how it is split and its arrangement. The Polus is the hardest map, because it is more open, which is more challenging for the impostor to vent and kill in without suspicion, and it makes it hard for crewmates to hide from impostors.

The game is a great way to get adrenaline, whether it is being accused of being the impostor, killing someone and being seen on accident, running away from the impostor, or finding a dead crewmate and having to vouch for yourself in the meetings. However, the game can get boring when you get crewmate ten times in a row or when the impostors are not experienced. The game experience truly depends on who you play with but overall the game is 9/10.