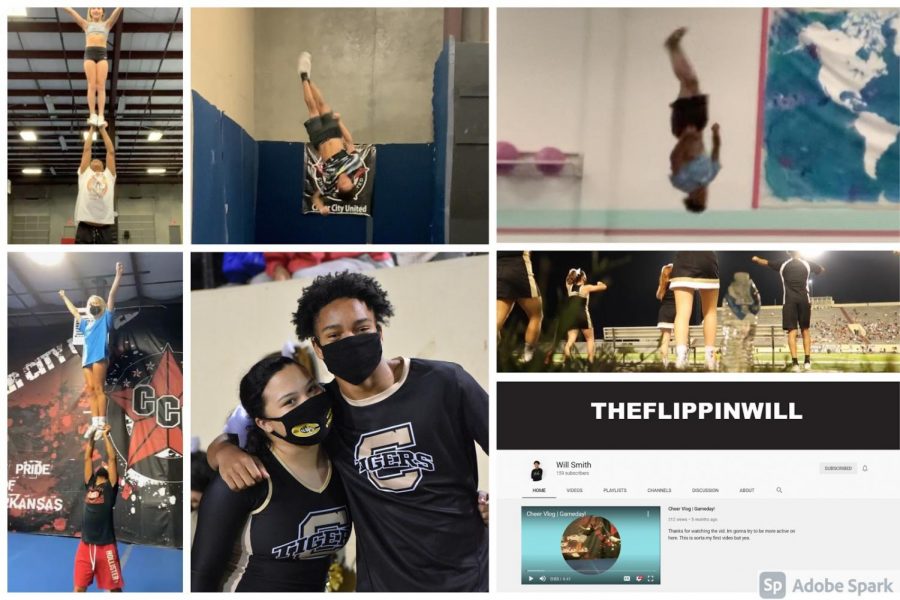 Ever since World War I, the sport of cheerleading has been known for the girls in uniforms, makeup, and big bows at Friday night football games. However, what is considered typical at Central is much more unique compared to the usual standard. Junior William Smith is a male cheerleader who loves his sport, even though he continues to be the male minority in a “girl’s” sport.

Smith has been a cheerleader since 4th grade, so he is no stranger to the harsh name-calling and stereotyping against men in the world of cheerleading that he has grown up experiencing. But Smith knows that fighting social gender norms is not the only challenging aspect to his sport.

` Besides the discrimination that he faces, Smith also puts hours of work a week toward trying to perfect routines, cheers, and flips. Along with the mental and physical challenges that athletes face, Smith says that it is easy for a cheerleader’s hard work to be undermined.

To the public eye, cheerleading is a hobby inspired by beauty, but in reality, there is much more that it involves. Smith says that he holds himself to a certain standard, because he knows that there is someone always watching.

“A lot of people look up to me, so I have to stay on top of my game and make little to no mistakes at all times,” Smith said, “I feel a constant pressure to always be happy.”

Not only is Smith a role model on the school’s team, but he also spends a lot of time with his Allstar Cheer City United (CCU) team as well. Allstar CCU is a competitive cheer team in Little Rock with a variety of athletes from all different backgrounds. With positive energy and passion, Smith pushes both himself and teammates to be better everyday.

“[CCU] has really changed my life! I have learned so many things that I will take with me as I continue to grow. It has given me a second home, and a happy place!” Smith said.

To show his daily dedication to cheer, Smith has also taken up vlogging during his numerous cheer practices. He documents the memories he makes with his teammates for fun on his channel @Theflippinwill.

Smith plans on cheering in college, which means that he would be able to earn generous scholarships and experience his favorite sport on a whole new level.

“The only reason I cheer is to flip!” Smith said.

Tumbling is the part of cheer that Smith loves the most. He loves learning and then showing off his impressive skills, and the drive that comes with tumbling is just as rewarding Smith says. Smith submerges himself in cheer, day in and day out, and now cheerleading is making a comeback in popularity for boys.