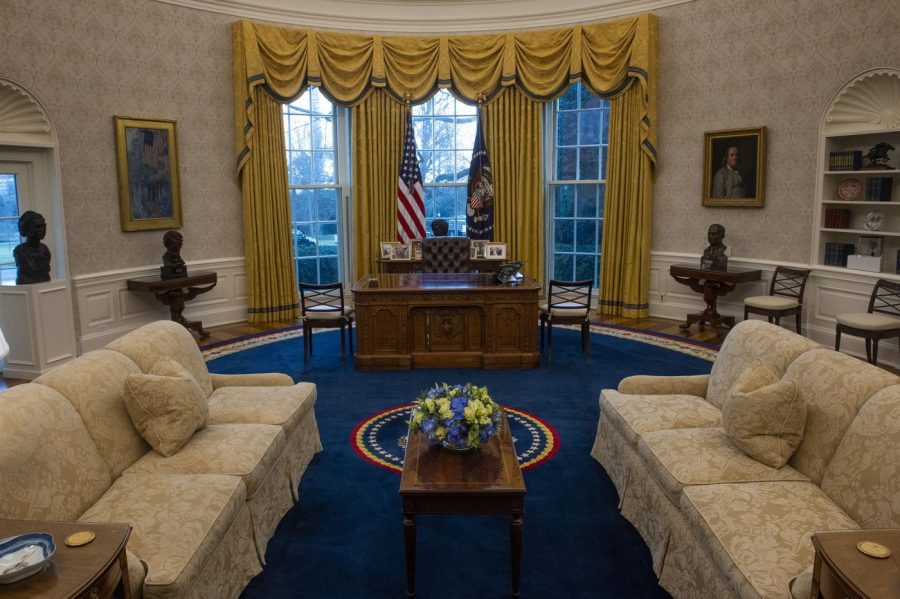 The changes from one presidential administration to the next are often presented in stark contrast, from the harsh smells of chemicals and loud thumps of tables being moved to sweeping executive orders. The transfer of power from former President Trump to President Biden spared no exception. President Biden quickly signed executive orders on topics like economic relief, the coronavirus pandemic, and climate action as soon as he took office. More subtle changes, like the Resolute Desk being reintroduced, are more indicative of personal style than administrative policy (Washington Post). Still, they characterize the current President and the legacy they are working toward.

Across from the Resolute Desk – portrait of Franklin D. Roosevelt. The late President was responsible for major economic policy in the midst of the Great Depression and President Biden has been compared to Roosevelt in the circumstances coming into office. President Biden is the first since Roosevelt for his party to gain the Presidency and a majority in both the House and the Senate.
Fireplace Figures – sculptures of Martin Luther King, Jr. and Robert F. Kennedy are placed near the fireplace. President Biden reportedly chose the two figures for their impact on the civil rights movement nationwide. Other sculptures around the Oval Office include Cesar Chavez, Rosa Parks, and Eleanor Roosevelt.
Symbols of Science – a portrait of Benjamin Franklin and collection of moon rocks are placed near each other to highlight the importance of science to policies of the Biden Administration.
Paired Paintings – Above the fireplace, two rows of portraits face each other: Hamilton & Jefferson are the first pairing, Lincoln & Washington the second. President Biden reportedly chose these individuals to highlight the importance of bipartisan cooperation.
First Fabrics – President Biden chose the gold drapes of the Trump and Clinton administrations with the dark blue carpet of the Clinton administration.